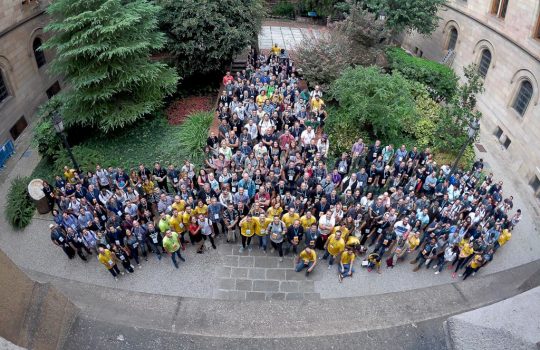 After a hectic weekend, we’re more than happy and proud to tell that WordCamp Barcelona was a complete success and attendees seemed to love it!

Organizing a WordCamp is not easy. First, there’s some bureaucracy. These events are organized by (local) volunteers from the WordPress community upon WordCamp Central’s approval — if you want to become the organizer of “your own” WordCamp, you need to contribute to the community first and start small, organizing a few meetups and building a local community in your area. But then comes all the hard work itself. Especially if you think about our backgrounds…

Bear in mind none of us are experts in organizing events. Most of us work on software projects and taking us out from our comfort zone doesn’t make things any easier. Finding a venue, talking to swag providers, choosing the right catering, managing sponsors, volunteers and speakers, designing the event image, shirts, website and merchandising… it’s super complicated!

WordCamp Barcelona 2018 had eleven organizers. This might seem a lot, but when you think about the fact that we all have our full-time jobs, deadlines, and so on… you quickly realize that finding some spare time to work on such an event is not easy. It definitely takes a lot of time (usually more than expected) and, contrary to what some might believe, WordCamps are all about team work. And thank God it is!

But enough about the complexities of organizing WordCamps — you already know it’s complicated, right? Let’s talk about the event itself. As you may already know, local WordCamps usually last for two days. One day holds the main event, with several talks about speakers. The other day is focused on contributing to WordPress. Do you want to know how they went in Barcelona? Keep reading!

One of the first decisions we made for our WordCamp was to open it with the Contributor Day. Other WordCamps hold the Contributor Day in the last day of the event, but David and Antonio thought that it’d be better if the order was reverted (as one can see in WordCamp Europe or even in WordCamp Barcelona 2015), because such a day is more relaxed and it’s easier to meet new people.

Some people thought it was a bad idea to have the Contributor Day on a Friday. After all, people have to work and wouldn’t be able to attend it, right? Well, luckily for us, there were 145 people in Barcelona’s Contributor Day!

Again, I am impressed by the Spanish #WordPress community: look at the number of people willing to contribute to the project at this local #WordCamp! And a lot of first time contributors. Well done @WCBCN 👏👌🎉 #WCBCN pic.twitter.com/Gv5kMANC5x

The Contributor Day was held at Movistar Centre, in Barcelona’s city center. Javier Casares was the leading organizer of the day, helped by some amazing co-leaders in every table:

They all did an amazing job and the attendees had a lot to do and learn. Congrats!

The WordCamp took place in the historical building of Universitat de Barcelona, built in 1863 by the architect Elías Rogent.

We visited multiple venues before opting for this one, but this was clearly the best. Again, it’s in the city center (which makes it very convenient) and is a public university with multiple breath-taking spaces. Funny fact: because of its appearance (some say it resembles a church) we had to clearly state to WordCamp Central that the venue was completely secular and belonged to a public institution… And we even had Guttemberg with us!

According to most of the attendees I talked to and what we’ve read in social media, the venue was also a complete success!

Registration and attendance ratios were also fantastic. WordCamp Barcelona sold 374 tickets and there were 347 attendees. That is, we had a no-show rate smaller than 8%. Pretty cool, huh?

The event started with Joan Artés welcoming everyone. Unfortunately, I was at the registration table at that moment and therefore missed Joan’s opening talk (that’s one of the issues of organizing an event… ).

One of the core components of a WordCamp is its talks and speakers. You have to make sure you choose a diverse, entertaining, and insightful programme so that you attendees have a good time and learn. We opened the call for speakers way before the event and received 127 proposals, a lot of which were just great. After a complicated selection process, the organizers came up with the final programme. The event was divided in two tracks. One track took place in the Paranimf Room and had Joan Boluda as the emcee. The talks there were:

The other room, Aula Magna, had Juanka Díaz as emcee and hold the following talks:

My organizing duties stopped me from attending to most of the talks I wanted to see… but I could see some nonetheless. One I enjoyed was Guillermo Tamborero’s, specially when he run a few tests in real time on questions from the audience. So brave! And, of course, I also loved the fact that Pablo Moratinos mentioned Nelio A/B Testing as the best plugin for running split tests on your website.

The last “talk” of the event wasn’t a talk per se, but a Q&A session. Fernando Tellado and Fernando Puente graciously directed Doctor WordPress, a funny and relaxed session where the attendees were able to ask anything in an informal manner. I honestly think this format worked perfectly! What do you think?

These events wouldn’t be possible if there weren’t any sponsors, and so this time we made sure they had the importance they deserve. The sponsors area was placed between the two rooms, making it naturally for any attendee moving from one room to the other or taking a coffee to meet them and talk to them.

We also gave plenty of time between sessions to facilitate networking. The pace of the event was calmed and everyone could enjoy the venue and the company.

I could go on, and on, and on talking about the event and its ins and outs. But I hope this brief summary has given you an idea of what happened this past weekend in Barcelona and, more importantly, becomes one of the reasons for your coming next year. If you missed it, take a look at the official pictures of the event and stay tuned for the upcoming videos on WordPress TV.