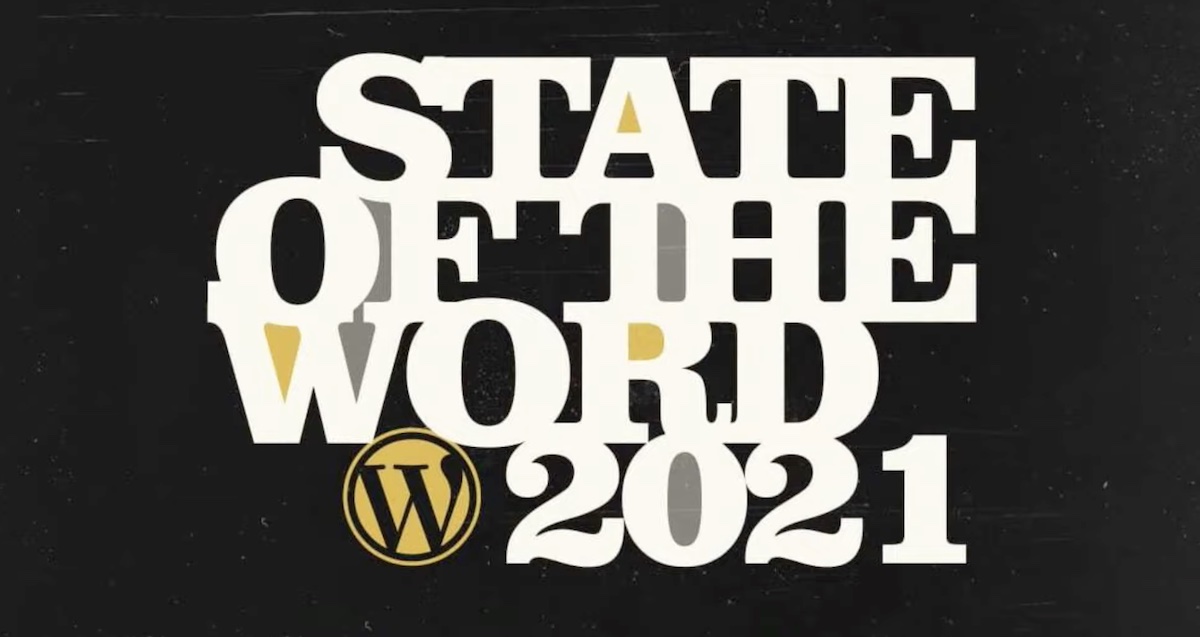 Every year, Matt Mullenweg delivers the “State of the Word,” a keynote where he explains what happened during the year in WordPress and how he sees its future, as well as sharing a Q&A session with the audience.

If you haven’t already, my recommendation is that you watch the entire talk below. But if you don’t have the time and want to get up to speed quickly, in this post I’d like to share the highlights he shared.

Matt began his State of the Word 2021 presentation by saying that he had just returned from a trip to Antarctica. He had time to read, in particular about Earnest Shakleton, the great Antarctic explorer. Earnest Shakleton on one of his trips to the South Pole turned back when he was only 97 miles from reaching the Pole. He was so close! This anecdote made him think about the unusual delay of the release of version 5.9 and he identified with Earnest’s phrase, “better to be a live donkey than a dead lion.”

The details about what motivated the postponement of version 5.9 to January are well explained by Anne McCarthy in this post. Basically, version 5.9 should include a whole set of Full Site Editing features that are interconnected (styles, block theme flow, the navigation block, etc.) and so it’ll take a little more time to release them together and make them shine. But don’t worry! Matt also said 4 releases are coming in 2022 so… plenty of news ahead.

Matt started by congratulating the 8 new people who have entered the list of Core Committers in 2020 and 2021. These are the only people who can commit a version of the WordPress Core.

Don’t miss the interviews we did last year with two of them, Tonya Mork and David Baumwald, which will surprise you.

Then Matt commented that work has been done on the redesign of the WordPress.org news page (News Page). Shapes, typography, design, and colors have been changed to make it look more playful look like jazz.

Next he talked about the Openverse project (the project was named before Facebook announced Meta). Its goal is to have a clean, open source, and ad-free site that WordPress users can access from the Media Library. Openverse is a very interesting project that has its origin in Creative Commons and if you want to know more details, we talked about it in this post.

Another novelty that we have had this year and which we already talked about previously in our blog is the Pattern Directory. As I told you, it’s a WordPress.org directory similar to that of themes or plugins in which you can search, select, and copy those patterns you want for your website. And you can even upload patterns to make them available in the directory.

You can now upload block patterns to the Pattern Directory directly from the Gutenberg editor (before you had to submit them via Github). We will have a large set of patterns that you can copy and paste to create great posts and pages as if it were a Lego.

WordPress Polyglots are the people who translate WordPress itself as well as its themes, plugins, and any other WordPress related content into languages other than English.

The numbers in this sense are quite impressive. The Core language packs have been improved by 76%. We also have 28% more active translators with a total of 15,900. Currently WordPress is translated into 71 locales.

All this is being carried out within the Glotpress project, where other projects such as patterns, the pattern directory, and Openverse are also being added.

In 2021 the Diversity in WordPress program has been created with the goal of helping those who have never spoken or participated as speakers in a WordCamp or any other WordPress event, with tools and resources that teach how to speak in public. This year the program has been carried out in 25 events with 135 participants in 66 cities in 16 countries. If you want to be part of this initiative, you will find more information at make.wordpress.org/community.

In the same vein, the Learn WordPress Directory has also been created so that more people can learn about WordPress. There you will find workshops and lesson plans for beginners and experts.

In 2021, 186 Social Learning Spaces (Social Learning Spaces) have been created. These are groups of people who gather to learn from one another. In the directory you will also find 73 workshops and 70 lesson plans available in 21 languages. You also have 2 courses that are a collection of lessons and resources with which to learn.

Matt has invited all listeners to participate by sharing workshops.

I think that with this image you already have clear the current distribution of WordPress in the world.

The number of themes included in WordPress has doubled. And the most interesting thing is that this 4% growth over last year in the use of WordPress is not really stealing from other CMS but from other types of platforms, as you can see in the following image.

A growing concern on the Internet is security. This year more than 30 people (10 of which did it for the first time) contributed security patches to WordPress. Security is an ongoing process in which a large investment is made by collaborating with CDN and Cloudfare. In addition, knowing that security cannot be guaranteed, pressure is put on hosting companies to update WordPress automatically so that they have the latest security improvements.

Speaking of updates, Matt has commented that in the theme repository we started the year with 2 block themes and now there’s over 28. These themes are built to be fully customizable within the Gutenberg theme editor. In this post I already talked about how you can create a new theme block.

In addition, the new default theme Twenty Twenty Two uses blocks, theme.json, and the new design tools that will be discussed later.

Since WordPress version 5.8 you have the option to edit widgets directly in the block editor. This way you can make changes in a similar way to how you edit any page.

In the image below, the widget shown in the sidebar has been created with the block editor.

I already told you in this post about the Query Loop block. As Matt says, it’s perhaps one of the most sophisticated blocks that WordPress has. Related precisely to widget management, it’s a block that allows you to display a list of posts, pages, or any other custom post type with different styles and can apply filters depending on the type of content displayed.

With the new version 5.9, Matt said that new features will be added to the editing of this type of block.

We have also seen a short demo of how we can use the duotone filters that came with WordPress 5.8 that basically allow you to select two filter colors to any image and the image becomes two tones.

Matt, of course, wanted to emphasize that all these features and advances in WordPress are possible thanks to the thousands of people who have worked on them. In the WordPress 5.7 version, named Esperanza, we had 481 collaborators of which 24% were new. For version 5.8, named Tatum, we had 530 participants with 25% new. And so far, for version 5.9, Hatchery, 580 people have already contributed.

Hey! If you want to be in the photo, you still have time. Remember that the release of WordPress 5.9 has been delayed.

Matt has commented that the highlight of the WordPress 5.9 version is that you can edit the theme within the block editor, customizing its styles. There are also improvements related to pattern editing. I think the best way to get a quick idea is that you see the three demos that have been shown in the keynote.

Matt said that he’s been working on WordPress for half his life and wanted to emphasize his renewed commitment to make WordPress being free software. He talked about Web3 and the decentralized web.

This year 2021 in the WordPress business ecosystem there have been many company acquisitions.

Although it may seem very surprising, Matt has commented that it is consistent with the trend that has been in the technology market and in the technology environment alone there have been 10,000 transactions in the first 9 months of 2021. He has also compared these figures with those of other economic sectors and the stock inflows, coming to the conclusion that it has been an absolutely extraordinary and crazy year and that it is surely related to government stimulus. In other words, this extraordinary year has not been unique to WordPress.

Matt commented that the impact of Automattic and other companies on WordPress is not directly related to the size of the company. He gave the example of Yoast that with only 16 employees has much more impact on WordPress than hosting companies like GoDaddy or WPEngine with over a thousand employees. He is confident that in the future, there will be more companies with a greater impact on WordPress. And the key to this is that there continues to be this Five for the Future philosophy that is based on all companies contributing 5% of their time and resources to the WordPress community. This is the only way we will have the ability to continue to grow, and we are facing a challenge in which in the long run we all benefit from the existence of this ecosystem.

He also took the opportunity to review a little the 4 historical phases of Gutenberg, where he hopes that in 2023 we will already have a Gutenberg editor that can be edited collaboratively by multiple users and that is fully multilingual. To achieve all these objectives the key is in the participation of all: creating patterns, block themes, styles, or generating content for Openverse (there will be a directory of photos on wordpress.org with CC0 license).

Finally, Matt has commented that he misses the having 5% of face-to-face WordPress events. This year, WordCamp Sevilla 2021 was the first to be held in person, and he hopes that the WCUS 2022 in September scheduled for San Diego (California), can be in person.

Matt’s talk continued with a Q&A session where they discussed Openverse security; WooCommerce and Gutenberg; whether a styles directory would be created or not; how to get new generations into WordPress; how to keep WordPress simple and intuitive as its features keep on growing; and more! You can hear them all in the video.

Although still a far cry from the large WordCamps we had before the pandemic, we were pleased to see a face-to-face talk from Matt again, albeit in a smaller format. His keynote has served us, as always, to review everything we have seen of WordPress throughout this year 2021 and the perception that remains after listening to the State of the Word 2021 is that WordPress does not stop growing and that the model of creating free software with the support of a large company behind works and has a future.