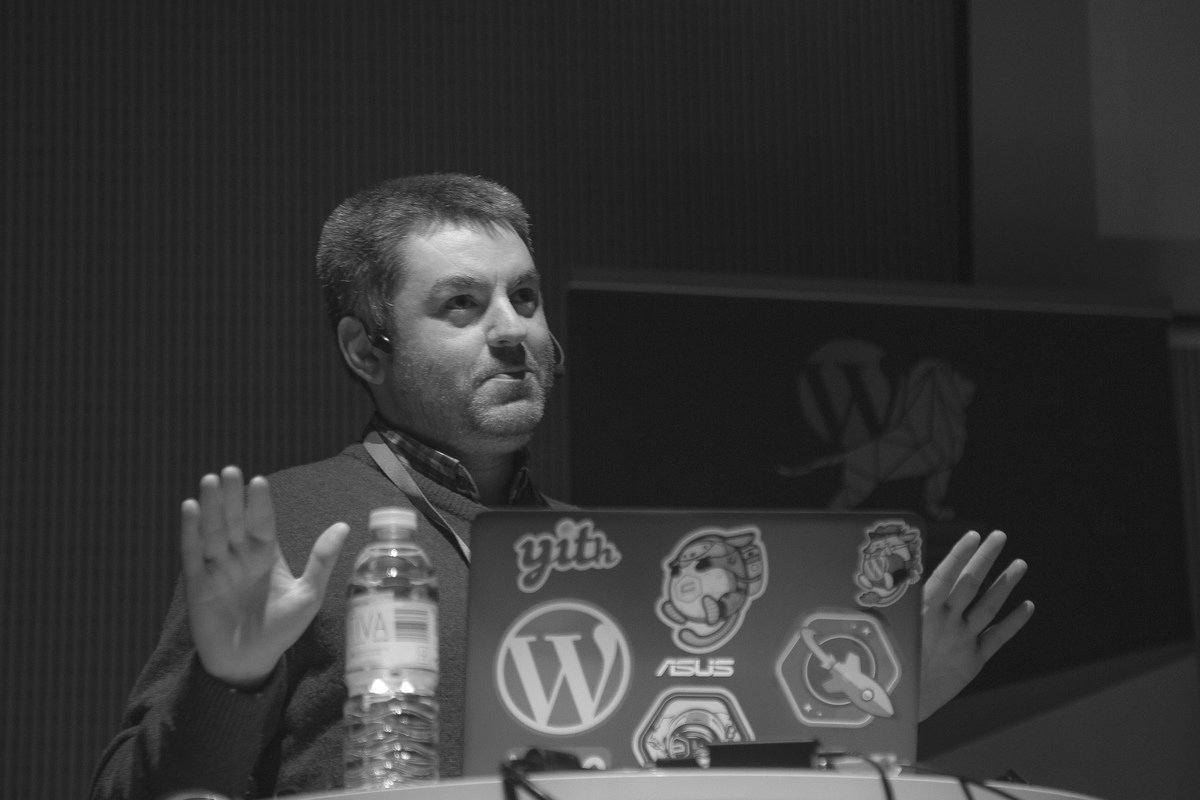 Samuel Aguilera – WProfessional of the Month

Welcome back to yet another interview with WordPress professionals. Today we have someone that both Pablo López and Ángeles Portillo recommended. He’s been working with WordPress for more than 14 years now and he’s worn multiple hats: translator, plugin developer, web maintainer, support engineer… Please welcome Samuel Aguilera!

Thanks for the interview, Samuel. It is a pleasure having you in here! For those who don’t know you, tell us a little about yourself and your relationship with WordPress.

Thanks to you, David.

I’ve lived in Zaragoza almost my entire life, but I was born in Algeciras (Cádiz) and I have spent many summers and Christmas there. So I have things of both places and sometimes may be difficult to guess my born place, because I have no accent.

My interest in computing began when I was a kid with my older brother’s 8-bit Amstrad CPC. Over the years, turning my passion for computers into my profession was my objective. Although I made a detour through the world of electronics, and responsibility positions on management and customer care, in the end I went back to computer science which is what I have always really liked.

So it’s been over 14 years with WordPress. During this time I’ve done a lot of things: translating stuff into Spanish (es_ES) when there was no WordPress Translators team and almost nobody did, providing WordPress maintenance services including the IT part (installing, configuring, and managing servers from console) and custom programming of both themes and plugins, and publishing plugins in WordPress.org. Currently I work at Rocketgenius Inc., creators of Gravity Forms, and I’ve been doing so since five years now.

You have quite a few plugins published on WordPress.org, all of them following UNIX principles: simple tools focused on solving single, specific problems and solving them well. The numbers support this philosophy, as your plugins have tens of thousands of active installations. Could you please share with us how do you feel about these plugins? How much work do you have with support?

Indeed, I currently have 13 plugins published on WordPress.org. Combined, they’re active in over 120,000 sites. And I have a few more on Github!

As you say, my plugins are usually focused on giving a simple but effective solution to very specific use cases. I work hard to make sure they age well. To do so, I always use specific WordPress functions, if they exist, instead of reinventing the wheel with my own PHP code. Which makes them efficient plugins and rarely need updates to work with newer versions of WordPress.

This makes easier for me to maintain them and greatly reduces the need for support.

Since 2014 you are working at Rocketgenius in the Gravity Forms support team. How is your day to day there?

I work remotely, although we are in constant communication through tools such as Slack or Zoom. And honestly it’s a pleasure to work with my colleagues, because we are all people committed to customer satisfaction and you can feel that in the day to day and in the work environment.

The bulk of my work consists of attending tickets of all kinds, from solving configuration doubts or diagnosing incidents to helping out with the use of the multiple filters and hooks offered by Gravity Forms or our REST API.

In short, I help our customers with anything they may need.

As you say, it’s already been five years in the company. So I have a deep knowledge of how Gravity Forms and our add-ons work internally, that means a broad knowledge about their code. Which adds up to my previous experience with WordPress and servers.

This facilitates the work a lot and allows me to help the development team fixing small bugs myself or even implementing new features.

You already know that Gutenberg has been one of the biggest revolutions in WordPress in recent years. How did you, guys, manage its release? Was it easy to adapt Gravity Forms to Gutenberg?

We were pioneers in the adoption of Gutenberg.

During the testing phase of Gutenberg we began to prepare the integration of Gravity Forms with this new editor. We created a specific add-on for our clients so that they could use our plugin with Gutenberg when the latter was not used widely yet.

At first it was a bit problematic because the WordPress team that worked on integrating Gutenberg into Core made frequent changes in parts of Gutenberg that affected any third-party integration that wanted to interact with the editor. As a result, we had to continuously fix and address the issues that these changes generated, as well as managing the problems our customers were facing because of these issues. Luckily, the number of users using Gutenberg at that stage was small, so it wasn’t a big deal.

Once Gutenberg became stable, we were finally able to make our integration stable too and move from an experimental add-on to Gravity Forms core. Our plugin now works well with both Gutenberg and TinyMCE.

There are developers who find it difficult to see the advantages of publishing free plugins, as they can’t directly benefit from them. What is your opinion? What role do you think your free plugins and contributions to the community played to get the job you have today?

Honestly, I have never thought about how I would benefit from uploading a free plugin that others would download and use. I’ve always done it because of that idealistic vision of giving something back to the community. And I say it sincerely: I think if someone does you a favor, you should give it back when you have the opportunity to do so. For me this is what sharing a free plugin means.

Now, I’ve never asked my boss what role my plugins played in the selection process, but I’m sure they helped. WordPress has been trendy for years now and a lot of people claim they have experience in it. If you have been publishing your plugins in the official repository for years, that is way more reliable than any CV for two reasons:

So if you know what you’re doing and you’ve created something useful, sharing it on WordPress.org it’s not only a way to help others but also a way to differentiate yourself from people saying they’re WordPress experts without providing any proof to demonstrate it.

There is no doubt that you understand the problems that people have in WordPress and you have the technical capacity to offer solutions. Do you think there are business opportunities for new WordPress developers? Sometimes it seems that people want everything for free and that scares some possible developers who, you know, want to make a living from their work…

Sure, the fact that WordPress as a base is free makes a lot of people think that everything you need in WordPress has to be free too. But I think the real issue here, what scares developers, is something different: people exploiting the GPL flaws.

But I would say that it does more damage and slows down more potential developers the fact that there are people who, making a vitiated use of the GPL license, dedicate themselves to reselling the work of others at demolition prices or even given away with the excuse of reducing costs. This, in my opinion, further fosters that philosophy completely free than the fact that the WordPress core is free.

For example, some time ago a designer asked in Slack if she could include the Genesis framework for free as part of her obviously-paid child theme. She was also worried about her theme being showcased in websites where one could download it from free. See the paradox?

And this is not an isolated case. There’s a lot of websites where one can find premium themes and plugins “for free,” as long as you pay for a subscription to those websites. So they’re basically making profit from somebody else’s work. This is not a Robin Hood’s tale as they want you to think.

So of course I understand why there are many professionals and companies who are reluctant to try to make a living with their own creations for WordPress. And I am sure that these flawed uses of the GPL are also the reason why we do not see larger software companies involved with WordPress.

But, on the other hand, I think that most WordPress users are fair and they simply want the best solution that suits their needs. And if they have to pay for such a solution or for a WordPress professional, so be it. Because, in the end, no one doing serious business wants to waste time.

Now it’s time for our most-acclaimed question: sharing an epic fail of your past. So it’s time to confess: where and how did you screw up?

A few years ago, after working on the new version of one of my plugins and testing it in several sites with different setups, I decided to release right before I went to sleep. At that time you couldn’t tell how many users were actively using your plugin (you only had download stats), so I had no idea of how many people were really using it and therefore what could be the impact of an update.

When I woke up the next morning I was surprised to see that I had support forum emails with complains from some users letting me know that my plugin had broken their websites. They were just a few, but I couldn’t replicate the issue on sites where it was working without issues, and these users didn’t provided either any useful steps on how to replicate the issue either.

Finally I was able to fix the issue during the same morning with a new update. It was fast for me, but users waiting for a solution during Spain sleep hours were already mad and they flamed the forum.  Although I received also some good feelings from other users, as you can guess since then I try to not publish updates on the night.

And finally, who else should we interview? Tell us what 3 WProfessionals you’d like to see in the next interviews and why.

Alex Concha, Samuel Wood (Otto), and Frank Bültge. They have plenty of experience with WordPress and I’m sure their interviews will be very interesting.

Thank you very much for this interview, Samuel. It’s been a pleasure to have you here today!