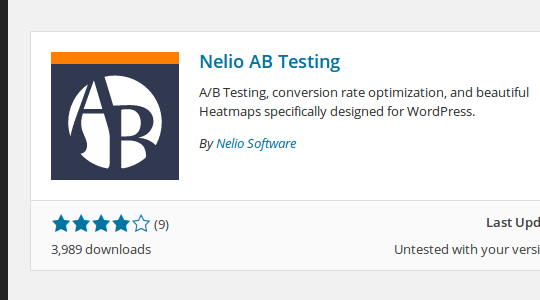 Nelio A/B testing is ready for WordPress 4.0 And you?

Yesterday, we saw the release of the first release candidate for WordPress 4.0 and, unless something completely unexpected happens right now, WordPress 4.0 will be officially released next week.

At Nelio, we have been checking the compatibility of our WordPress Split Testing service since the first beta versions of WP 4.0 appeared so feel free to update to WP 4.0 as soon as it’s out, Nelio will be still there working to make sure you keep improving your conversion rates (well, we are humans after all so if you run into a compatibility problem let us know and we’ll fix it ASAP).

And, as you can see in the above image, among the many improvements that WP 4.0 ships with, now the plugin installer shows the plugin icon (for those that have one, otherwise it generates a default one) so you cannot get it wrong: install the one and only A/B testing native service for WordPress!

3 responses to “Nelio A/B testing is ready for WordPress 4.0 And you?”