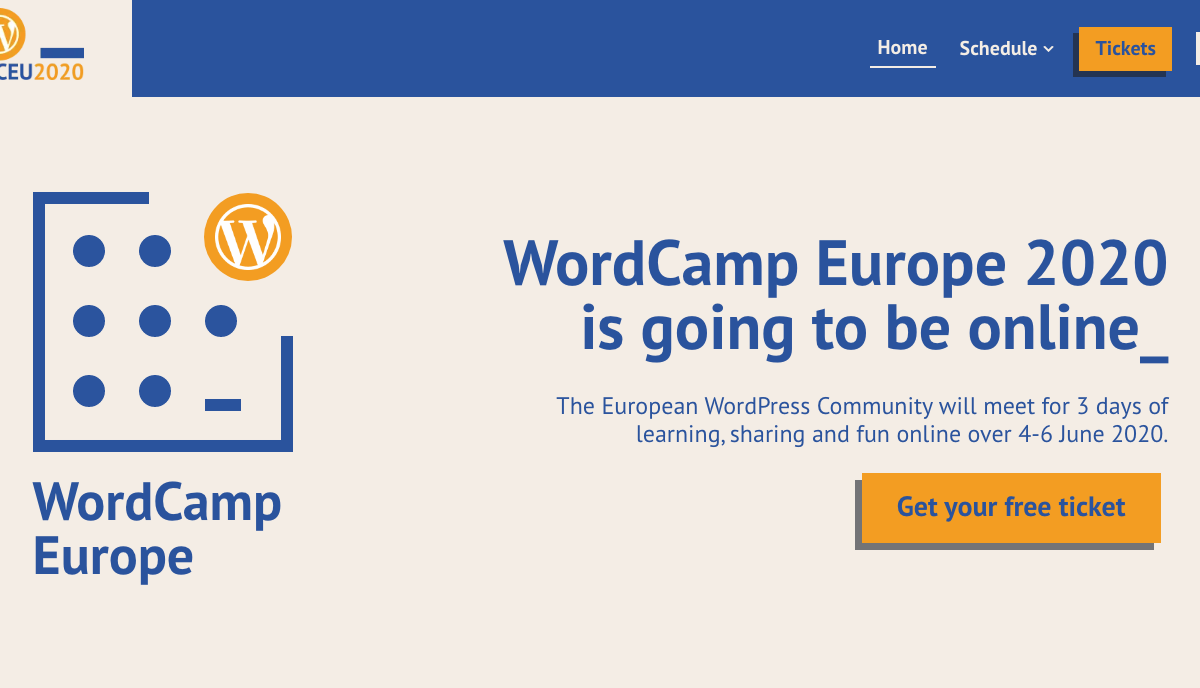 Getting Ready for WordCamp Europe 2020 Online

After our experience last year, we learned that the work of the organizer is very demanding but, at the same time, very grateful. I’m not going to post any more pictures here, but it was recorded that we had a great time at the WCEU 2019 after-party!

At the end of 2019, we already knew that there would be some news for 2020: we would have Toni’s baby in April and David’s wedding in September. So far, so good. Even so, we decided that this year 2020 our participation in the WCEU would be a little different from the previous year. David, who worked very well with José Ramón Padrón (@monchomad or Mon for those of you who already know him) in the previous WordCamp, got involved again in the content team. Toni, when he told us that he was going to be a father, decided not to commit himself this year 2020 and to be more relaxed (if you can say so with a baby) in order to enjoy his fatherhood. And finally, I decided to propose a couple of talks as a speaker and knock on wood for luck. We were looking forward to go to Porto in June.

David is our great environmental partner: he travels its almost 10 km out and up and 10 km back and down by bike (not electric) to come to the office, he teaches us about recycling, organic products, healthy life, sustainability etc. By now, you should know that incorporating an environmental profile into your team of partners is key to the success of any start-up.

But despite his youth and the healthy life he leads, at the beginning of the year, he told us that he has an osteochondral injury to the talus (don’t worry, you can put on the same poker face that Toni and I did). That is, he has a hole in an ankle bone and the date of his surgery is February 5th. He would be on sick leave for a few months… David couldn’t go to Porto.

We are told every day by all the media that the most important thing is health, so you can rest assured that David’s ankle is progressing well.

The content team was working hard during the month of January to select the talks to be presented at the WCEU 2020 in Porto. And in February, I received an email informing me that my proposed talk for WordCamp Europe had been accepted: A / B testing – the art of building better websites with science! We love good news! And what a great excuse to get to know Porto!

Well, we will have to start looking for a plane ticket, hotel and take time to start preparing the paper in question. It is one thing to propose a talk, but quite another to prepare a talk for WordCamp Europe. Don’t miss Sabrina Zeidan’s anecdote, about how she prepared for her first presentation in a WordCamp.

This is a Leap Year

Leap years, without no astrological explanation to support it, have a bad reputation and are the object of all kinds of superstitions. The murder of Gandhi, Martin Luther King, Lenon and the sinking of the Titanic took place during leap years, which has contributed to the legend of the bad luck. And this year seems to follow this weird pattern: on January 22nd, Wuhan closes (thank goodness that one of my daughters who is studying in China was able to return 10 days earlier). Here we hallucinated when we saw that they were building a hospital in a couple of weeks and, despite the fact we live in a globalized world, that was a story that was not for us and rather seemed like science fiction.

On February 12th, WordCamp Asia 2020 was cancelled and here, in Barcelona, the cancellation of MWC 2020 is announced. And the beginning of March, when Italy decides to isolate Lombardy, the WordCamp Europe organizing team sets off all the alarms. On March 12th, the website informs us that WordCamp Europe 2020 in Porto is postponed until 2021 and the speakers receive an email in which we’re told that they’ll give us more information. Tess Coughlan-Allen, Global Leader of WordCamp Europe 2020, told us that deciding not to hold WCEU 2020 in Porto was a very hard decision.

Two days later, on March 14, the Spanish Government decreed the entry into force of the state of alarm throughout the national territory for fifteen days. State that, as of the date of publication of this post, is still in force. David was little affected by the confinement since he was already in his house on leave. For Toni, it meant an extra dose of nerves to those he was already carrying with the preparation for the birth. And I, like many, had to organize myself as best I could with everyone confined at home (in my case, with the husband and 3 of my 4 children).

On March 24 they confirmed that the place and date of WordCamp Europe 2021 would be Porto, on June 3, 4 and 5, 2021. It was very good news to know that the entire Nelio team will be able to go to Porto ?. And I hope that all those who had reservations already made for this year, have been able to cancel and recover the reimbursement of them.

But that’s not all. The WordCamp Europe organizing team is not a team that sinks at the first sign of change. In a matter of a few hours, they rolled up their sleeves and made the risky decision to propose that this year’s WordCamp Europe 2020 be held as well. It would be online, on the dates that had already been planned. It was officially announced on April 6th. Only 2 months before it was to be held.

On April 10, Antonio’s son Oliver joins the Nelio team, eager not to miss the WCEU 2020 online.

And on April 15, the content team sends an email to all the speakers inviting us to participate in the WordCamp Europe 2020 online. And since we at Nelio love challenges, the answer is that of course, we’re up for it.

The email in which inviting us to participate in the new version of WordCamp also includes a whole set of instructions for changes to the format, etc.

We are given the option to record the 30-minute talk or to give it live online, for 20 minutes and then 10 minutes of questions and answers. They also tell us that they will give us more information about the online tools that will be used at the event.

And indeed, the WCEU online-speaker channel invited us to a webinar to familiarize ourselves with Open Broadcaster Software, OBS, which allows you to capture video sources in real-time, with scene composition, encoding, recording and streaming.

Even so, shooting 20 or 30 minutes of video at a time has nothing to do with making a live presentation. Either you have a lot of practice, or it’s probably better to do the presentation directly live. I had a lot of doubts about that.

May 19th was the deadline for submitting the PDF of the slides. And on that same date, the content team calls me for another meeting the next day to learn about StreamYard which is the platform that will be used to broadcast the WCEU 2020 online. Well, at the time I had that meeting, it happened that more than one person had an online class or a Zoom meeting at home. The WIFI signal was so unstable that the meeting itself was quite distressing and when I was asked if I had any questions I just thought that it would be better to record the presentation beforehand to take fewer risks.

After a few days, Mon told me that there is a new deadline for the delivery of the videos in case I wanted to record it. Apparently I only had a couple of days to do so! In addition, the format is no longer 30 minutes, but 20 minutes plus questions, even if it is pre-recorded. And not only that, you have to use a background template, record the presentation with your slides, and include the video where one can look at you as you speak.

Bearing in mind that our business is to earn income from the sale of our wonderful plugins, Nelio Content and Nelio A/B Testing and we are not professionals at making videos, we did the best we could from home confinement, and the video was sent on time to the organizing committee.

I recognize that the current situation adds an extra dose of stress by not being clear on how everything will work live ?. But for now we’re ready.

I would like to take this post to congratulate the WCEU 2020 organizing team for all the work done so far. I have no doubt that a lot of nerves and stress have gone through all the decision making that they have had to do under the current circumstances. In some ways, organizing a WCEU online may seem easier than if it were face-to-face, but I have no doubt that it involves many other complexities.

And to you, my dear reader, I hope you are in very good health and I can only say that I hope to see you on Friday June 5th at WordCamp Europe 2020 online.