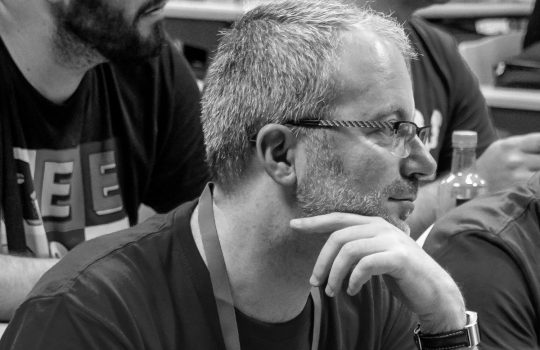 We’re back with another interview on our blog! Today we have one of the guys suggested by Ana Cirujano last month. He’s an expert in web optimization, backend lover, member of the WordPress community in Spain… he’s Carlos Longarela!

Welcome to the WProfessionals section, Carlos. It’s an honor to have you here! For those who do not know you, tell us a little about yourself and your relationship with WordPress.

Thank you, it’s my pleasure.

Although I have been programming since the last millennium, first in ASP and then in PHP, my relationship with WordPress started when I needed a blog for the magazine DNG Photo Magazine. It all started with a Blogger blog, but I quickly moved it to WordPress (which was in an independent subdomain of the magazine’s website). After a while, I migrated all the functionality of the web to WordPress, integrating it all in the same system.

Before using WordPress for that blog, I had used it in some websites at work (I worked for 15 and a half years in a computer department at the University of Santiago de Compostela, in web development). At that time I believed that WordPress was simply a blog management system—a system where one could create a few posts, pages, menus… but nothing fancy.

When I adapted all the functionality of the magazine to WordPress with external API calls and different cache levels (OPCache in PHP, Nginx cache in RAM, Database, disk, browser…), I saw what WordPress was capable of and I started to feel the great potential of this CMS. At that moment, I began to see it not as a content management system, but as a framework that laid the foundation for any application I might want to create.

Shortly after that I joined the Slack of WordPress Spain and got to know the community. This changed my professional life completely: the first WordCamps, Meetups and more related to the Spanish community arrived. I started to collaborate more actively in the forums, I began to make some translations and collaborate as much as possible within my time and my possibilities. This showed me that there’s a lot of people like me in Spain—even if you work alone, there is always someone doing the same job we do and in whom we can support for many of our daily tasks. Discovering the WordPress community in Spain was a 180 degree turn in my career.

As an expert in web optimization from a backend perspective, what advice would you give our readers when looking for a good hosting provider?

There are many factors to consider when choosing a hosting: one of them is the PHP version supported and the version of the MySQL, Mariadb or Percona database. In addition, the cache options provided by the hosting itself are of vital importance to opt for one option or another. You might even want to consider SSH access, GIT, backup copies, staging…

But I think the fundamental thing besides speed is customer support. If we can call them at at any time, 24 hours a day, they’re an option worth considering—keep in mind webs not only fail from 8 to 20, but can have a problem at 2am and you might need to contact the hosting. And the more support channels they give me, the better: tickets, chat, email, telephone… all these things are decisive.

You were a speaker at the last WordCamp Pontevedra, you give support in the WordPress forums, you are part of the team of translators (both in Spanish and in Galician). What pushes you to contribute to a project in an altruistic way? What would you say to encourage our followers to participate and follow your example?

Actually, I don’t contribute in an altruistic way—the only thing I do is give back to the community a small part of what it has given me. My work is almost 100% WordPress, so I’m basically making money with an Open Source CMS that’s nourished by the community. It’s only fair that I give something back to the project, don’t you think?

Consider the following scenario: sometimes I translate a plugin in Spanish for a particular client. I could obviously translate it only for them, but I think it’s better if I make that translation available to the whole community. This way, we make it possible that everyone gets a small benefit from our work, which, as I said, was possible thanks to what others did before.

If in addition we have also made a plugin that may be of general interest, it is a very good idea to upload it to the WordPress plugin repository so that other people with that same problem can benefit from it.

To convince anyone else working with WordPress that they should spend some time collaborating with the community, I would simply tell them to think about how much time they saved using WordPres, or installing a free plugin from the repo in your project, or reading that blog post that explained how to solve an issue.

Most of the projects you’re given use WordPress, but there are some that might need a different, more suitable platform. Could you share some examples of those? What criteria do you use to decide what’s the best possible platform?

Nowadays, almost 100% of the work I do uses WordPress as a base. We can use WordPress for a simple web, a very complex portal, a forum system, a magazine, an online store, a CRM, a billing system, and a multitude of projects that rely on WordPress as their backend.

But still there are some projects for which WordPress isn’t the best solution, and so I’m not afraid to use different things. For example, if the client only needs a billing system, I would probably recommend a fantastic project such as Invoice Ninja. Another example: if you want a help desk system, I would probably go for Feshdesk, Zoho Desk, or similar solutions, and forget about WordPress.

With that said, most of the projects my customers ask explicitly require WordPress. But if they ask for certain functionalities that work best outside WordPress, that’s what I’d recommend. For example if the client tells me that he wants to manage the email from WordPress, well, it’s technically possible, but I would recommend to use a desktop app such as Thunderbird or web clients such as Gmail, Outlook.com, etc.

Now that the block editor is already a reality and seeing the pace at which WordPress is evolving, I have to ask you: Did you listen to Matt and learn JavaScript deeply? Do you think that the future of WordPress is in JavaScript and, therefore, you have to recycle yourself, or is there a lot of work to do in the backend / PHP?

Well, some time ago I learned Vanilla JavaScript in the late 90s. Not deeply, but enough to solve the issues I’ve encountered since. But I’m still trying to learn every day.

A few years ago, when I developed some Mobile Apps with WebWorks and later with QT, I started using Zepto.js, so using jQuery in WordPress was second nature (assuming you couldn’t use Vanilla JS ?). I’ve hardly played with React—I don’t have much time, as I’m more interested in other areas.

I believe that the future of WordPress will be focused on the frontend and therefore on JavaScript. Today we’re using React, but we might use a different library in the future, so it’s paramount that you understand the fundamentals of JavaScript and learn the basics of programming in general.

Back to PHP, I think PHP will be around for a while, as it’s a language that is evolving quickly and nicely.

One of the advantages of working in digital environments is that the customer base can be global. However, a lot of people would rather work with local customers and partners. What is your experience in this? Where do your customers come from? Galicia? Spain? The world? What strategies do you follow to capture them?

Well, lately my clients are geographically closer to me than ever. My latest customer is from Lugo, and the one before that was from Pontevedra. Before that? Most of my clients where Spaniards (Madrid, Barcelona, Valencia…) and some came from Latin American countries. But it really doesn’t matter where they come from—I normally talk to them with Zoom, so distances are not a problem.

One of the most effective ways to capture new customers is the word of mouth. For this, attending Meetups, WordCamps, and other programming events is very important. And obviously: a satisfied customer can always bring other customers, so we must bear in mind that treating a customer well is always a guarantee of success!

The blog can also be very helpful (even if I don’t write as much as I’d like to). You can always address an issue that’s relevant to a prospect, and that blog post can be the beginning of a new project. Social networks such as Twitter or Facebook, but mainly LinkedIn, are also great at attracting customers.

Finally, your personal network is also very important. When I need an expert in SEO, SEM, a designer, a copywriter, etc., I contact one of the professionals I know. Reciprocally, when they need someone with my profile, they contact me. This professional relationships are extremely helpful when it comes to find new projects!

You know we always ask our guests to share a blunder… and that’s exactly what I want you to do right now. Tell us some epic fail you had and what you learned from it!

Throughout my professional career as a programmer I have had many fails. But you always learn from them, if you want to.

One of my first epic fails with WordPress occurred when personalizing a website for a friend. At that time I didn’t know much about WordPress, but I had a lot of experience with PHP, HTML, CSS, and JavaScript so… I customized the web manually. I didn’t use any of WordPress’ features—for example, if my friend wanted something in a sidebar, I inserted the HTML directly into the template instead of adding a widget in a sidebar area.

As a result, my friend had the web he wanted, but it was poorly implemented and couldn’t be further customized without rewriting its templates. And not only this! I added all my customizations in the parent theme—I didn’t even know there were child themes.

Today I find similar cases many times: instead of creating a child theme or modifying certain functions in the functions.php, people overwrite the original files , they change functions that later do not allow us to update certain plugins or themes … but I think that as the years go by we are learning how to do things correctly. As I said before, it is a day to day learning.

Finally, who else should we interview? Tell us what 3 WProfessionals you would like to see in the next interviews and why.

You already interviewed many of them! Fernando Tellado, Pablo Moratinos, Ana Cirujano…

The first one I’d like to see is Wajari Velásquez. He’s a great professional and I’ve had the pleasure of collaborating with him. He’s an expert in SEO and is very, very involved in the WordPress community (both in Spain and Galicia).

If we talk about one of the “founders” of WordPress Galicia, Juan Hernando is your man. He’s a great acquaintance of the Spanish WordPress community and a defender of free software.

Finally, I’d like to nominate the designer of the logo of the first WordCamp of Galicia, Lua Louro. She’s a designer and front-ent web developer who loves WordPress. I admire her and I’d love to see her here.

Thanks again for this interview, Carlos. We loved knowing your story. And thank you also for recommending us these three great professionals. See you with a new interview in a month!